Today I have a bit of a wacky card to share with you all. I was playing around one night with this Rooster I had stamped above from the SPRING CHICKS set, and if you know me I love rainbows, and so I thought it would be fun to color his tail feathers in rainbow bright colors. Once I was done coloring him in I die cut him out using the coordinating die and when I went to pop it out of the die, the die-cut fell to the floor and as it fell it did a little spin in the air which inspired this spinner card.

So now that the rooster was done, I die cut a record from the RECORD PLAYER | HONEY CUTS and glued the rooster to the middle of it. Next, I used the musical note background stencil from the SHEET MUSIC STENCILS set and used distress oxide inks to blend out the colorful rainbow background to which then I applied a layer of Moonstone Glimmer paste too. 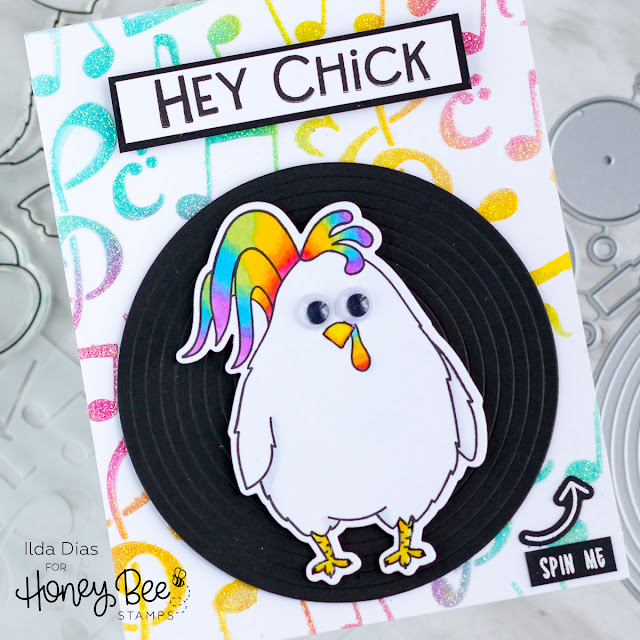 To the front, I also added the Hey Chick Sentiment that comes from the SPRING CHICKS sentiment set and also stamped out the spin me and the arrow and white embossed on them on black cardstock from the ONE-OF-A-KIND set and then die cut the arrow with the coordinating die. 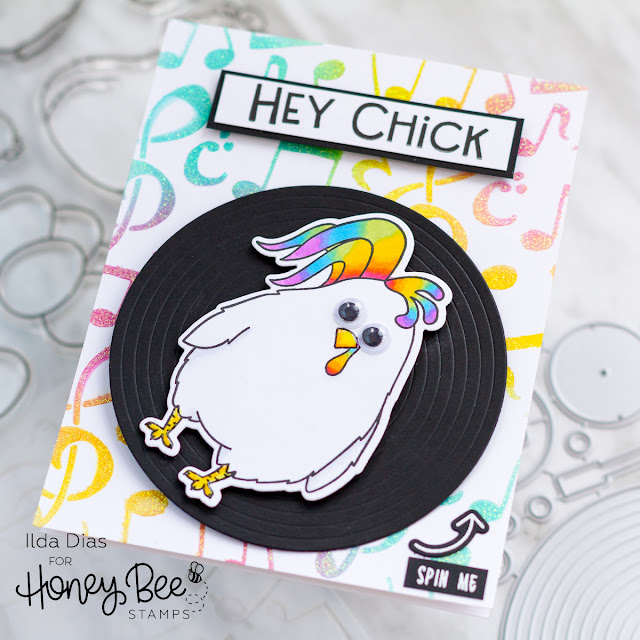 On the inside, I thought this sentiment from the FOR THE RECORD stamp set was quite fitting and now I that said that I can’t get the classic 80’s song from Dead or Alive out of my head now, lol! 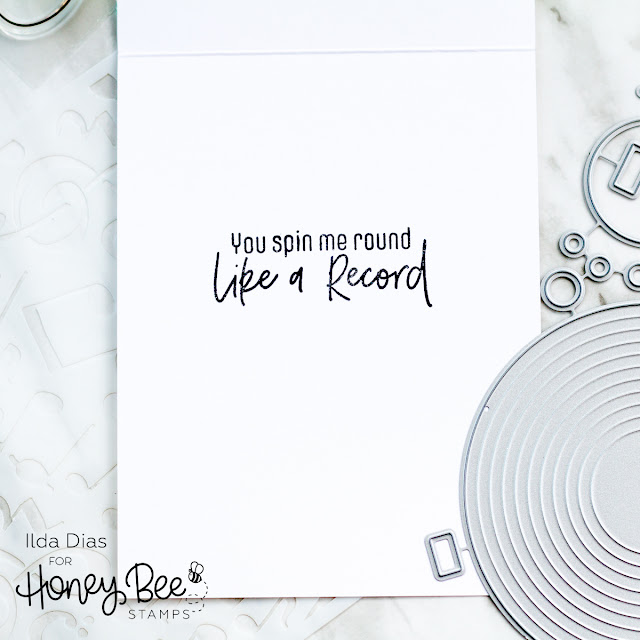 The next few pictures are to help visualize how I created the mechanism for the record to spin on the card front. As you can see I had already glued the musical note panel to the card front and adhered the banner.

So the first thing I did was figure out the center of where the record would be and the easiest way to do that was to use the record die and center opening to make a marking on the card for the next step. Using the one of the Medium-sized circle dies from the PENNY SHAKERS | HONEY CUTS set I die cut the opening on the card front as you see below. (I did have to break apart the die set only to remove one of the medium circles for this part, the rest of the die I left intact). 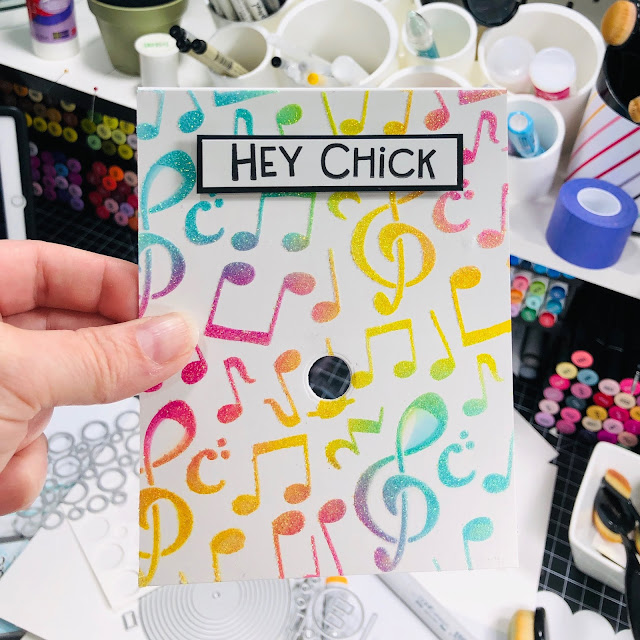 Next, I die cut all the Penny shaker circles out and then used what I needed to build a spinner mechanism. (One large circle die and 5 stacked small circles are what you see below that I have glued togther). 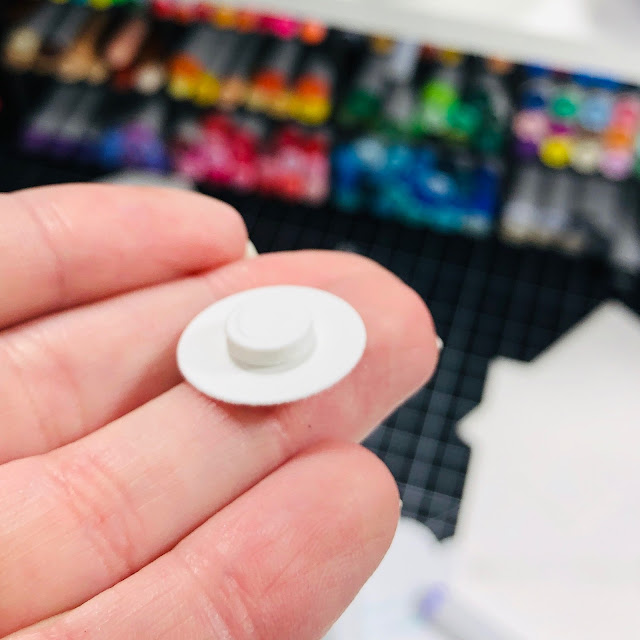 Now from the inside of the card, pop the spinner mechanism through as shown in the next picture. 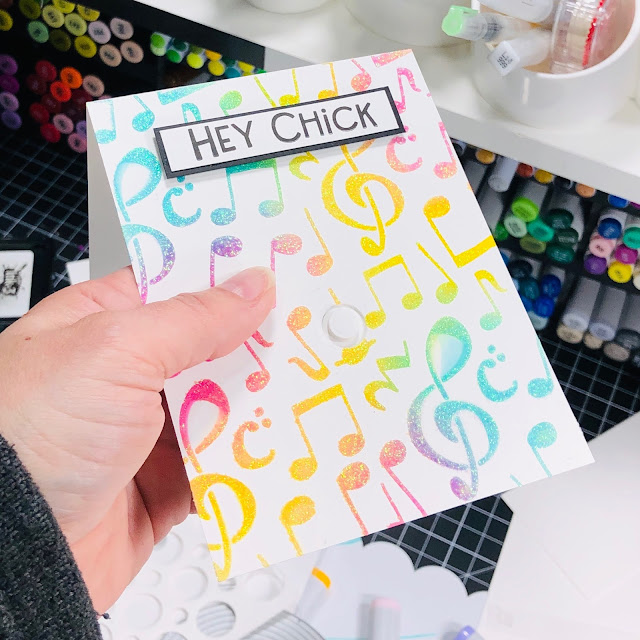 Add a drop of glue to the top and top it off with a large circle die from the PENNY SHAKERS | HONEY CUTS. Now it’s ready to add the record to the circle die using some strong adhesive. 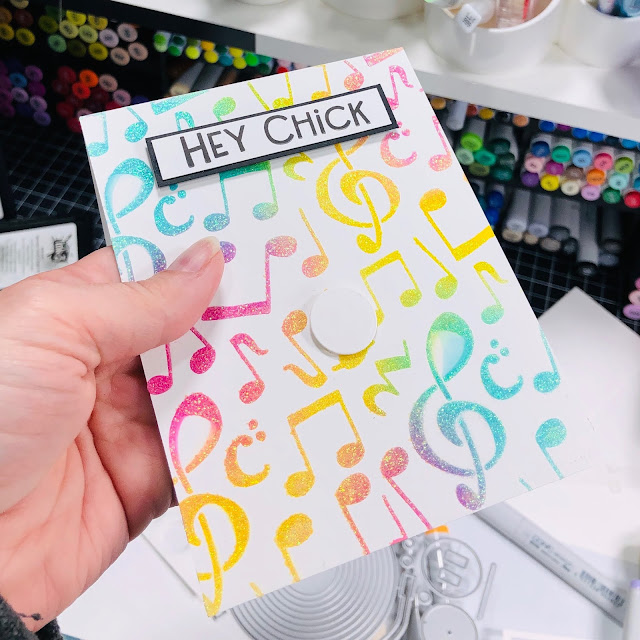 Here is what you see on the top side of the front flap of the card when you open up the card. 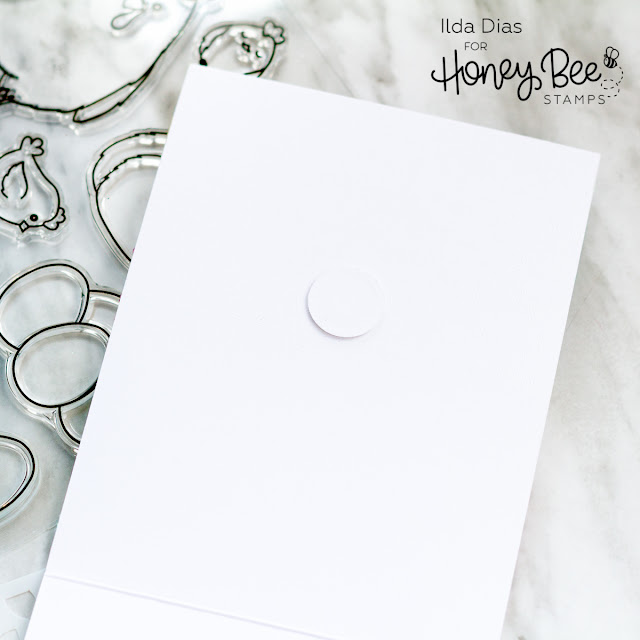 So I thought it would be fun to share the spinning Rooster in action so here is a little clip.

I hope you got some inspiration from this wacky and colorful Spin Me Round Like A Record Spinner Card today.

Thank you for stopping by and until next time… Happy Crafting!